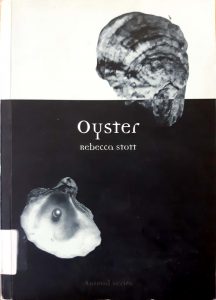 “Oyster’’ is one in a series of natural history books including titles such as ‘’Fox”, “Falcon” and “Wolf”, and while this volume includes plenty of biological information, many of the more intriguing and entertaining chapters describe the way oysters have been viewed by a variety of writers including poets, philosophers, and theologians, as well as by painters, photographers and sculptors.

Rebecca Stott wryly observes that many of the views presented are contradictory in nature – oysters have been associated with gluttony but also epicurean fine dining, with sexual appetite but also physical revulsion, and as evidence of Darwin’s theory of evolution but also as the immutable product of God’s handiwork.

One of the most interesting chapters contains a fascinating explanation of how European painters in the 17th and 18th centuries obsessively tried to capture the play of light on oyster shells and the glistening flesh of the opened oyster. The paintings are beautifully reproduced and help the reader appreciate the symbolism and multiple meanings that can signified by the humble oyster.

Particularly enjoyable are the poems – two that are memorable describe how the oysters eaten by Lewis Carroll’s walrus and carpenter take their revenge, and how the young girl selling oysters turns the tables on her elderly aristocratic client.

While the cover is not particularly appealing, the light-hearted and often humorous tone of this book makes it well worth dipping into.