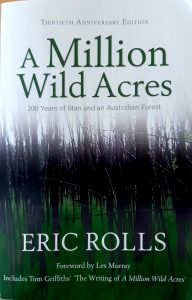 This book is sub-titled ‘’200 years of man and an Australian Forest’’, and details the long-term effects that followed from the early white pioneers crossing the Blue Mountains and occupying the lands of northern New South Wales.

After the book’s publication in 1981, Rolls’ views were regarded as contentious by many historians, ecologists, and environmentalists because he challenged the widespread view that much of northern New South Wales was originally covered in dense eucalypt forests that had to be cleared by the pioneering settlers. He argued that the forests developed as a result of mismanagement of the land by those settlers.

In recent years Bruce Pascoe has drawn on the research of writers such as Eric Rolls to present an eloquent plea for recognition of the wisdom of the land management strategies practised by earlier indigenous inhabitants. For those who have enjoyed ‘’Dark Emu’’, it is worth checking out this detailed analysis to understand how it supports the case presented by Pascoe.